We arrived 25 minutes late, but it seems that we were actually an hour and a half early. Nikki has been explaining to me the constant struggle she has with timing her arrival. We did much better in our second engagement of the day when we arrived at 4 for a 2 ‘o clock party. The first engagement was to be a Son Jarocho gathering.  Son Jarocho is a traditional music from the Veracruz region of Mexico. It consists of small guitars called jarana jarocho and other percussion instruments. One of Nikki’s friends gets together with a group of people every Sunday to practice. The musicians were dwindling in one by one, chatting as they came, stopping for coffee, and generally approaching the gathering with an ease rarely seen in the states. When it was clear we would be waiting a while for the music to begin, we walked down to the organic market.
At the far end of the market, Sandro and his wife had set up their kiosk. Sandro is an Italian man and his wife is Korean. They apparently met in India and now make their home in Oaxaca. They were also at the market we went to yesterday. Their food offerings, a mix of Italian, Korean and Mexican, stand out in a selection of mostly corn tortillas with beans and vegetables and meat. Having tried quite a few Mexican delicacies in the past few days, I decided to try Sandro’s eclectic mix. So, for lunch I had dumplings with ricotta cheese and tofu and cellophane noodles and salad. Hardly the lunch I was expecting on a Sunday in Oaxaca. But, at the same time, I am coming to learn that Oaxaca seems to be a place that attracts the unexpected, the alternatively minded, and the eager do-gooder alike.

After eating our dumplings we walked back to the big tree where six women and a Cuban artist Gabriel were now gathered. Instruments were starting to come out. A few chords were being strung and exercised. Two ladies were changing into clog-like black heals. Gabriel took some people into his nearby studio to grab a wooden platform to allow the dancing to resonate as a drum beat for the guitarras. Slowly, each person began to turn away from their dogs and their conversations and commit to the music. First the guitars, then the voices, one by one taking a verse at a time, then the dancers started to join in. For one more layer of percussion, Gabriel contributed by playing the jaw of a cow skull, called a quijada. 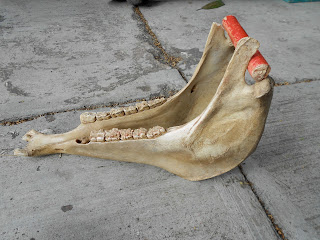 Gabriel, clad in high tops, striped colorful pants, a black t-shirt, and a woven striped scarf had face wrinkles indicating he had spent most of his life smiling. He greeted me with a smile and cheek kiss. He is one of those large personalities who clearly writes many of his own rules in life. At one point, he left the music circle to climb up the nearby power tower that he was using to dry his laundry. It was fitting that he was playing a cow’s skull.

For the first song, Nikki and I sat and listened to the sounds weave together in perfect harmony. I was impressed that the musicians were mostly women. As I listened to them jam, I was reminded of Flamenco music. My college boyfriend had been a Flamenco guitarist, thus I had had the good fortune of spending many nights around musicians and dancers. In those crowds, I had never seen a female who played the instruments. In this Son Jarocho circle, the women were doing it all. I’ve heard Oaxaca is famous for a lineage of strong women. This gathering proved no different.

Soon, the music and dancing were in full swing. Gabriel, not one to leave anyone out, retreated to his studio for another cow jaw and African drum. He proceeded to teach both Nikki and I to play the quijada, and between the three of us, we created quite the rhythm section. Sitting with my red baton, and jagged teeth, I felt like I belonged for one of the first times since arriving. 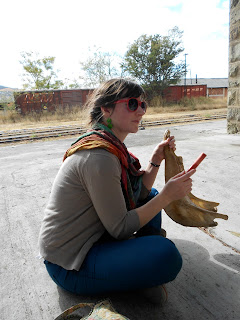 Any other time I have been in a group of Mexicans, I have been the clear outsider. Not speaking the language, I have mostly been smiling and nodding and doing my best to connect when possible. But, with a cow jaw in my hand, I felt like one of them. As the songs continued, I found myself modifying the rhythms Gabriel taught me. Up, down, up, bang would turn into up, down, up, down and then maybe a little, down, bang, down, bang. I was adding my own unique flavor. Every once in a while, I would get self-conscious and retreat. Instead of banging and brushing with confidence, I would bang meekly looking to Gabriel for approval. That never worked out. I’d soon lose the rhythm and the feeling that I belonged. So I would go back to stroking the teeth as if I was born doing it.  I never said more than hello, how are you and goodbye to the people I was with, but through music we found another language altogether.

Somehow while I was preparing for this trip, two things slipped my mind. The first is that I am allergic to black beans and black beans would be virtually everywhere in Oaxaca. The second is that my Spanish is terrible and everyone would be speaking Spanish.

With regards to the first, I decided to do a test run in Chicago last weekend. I know how I work. I knew that upon arriving, I would look at the delicious beans and decide that I probably wasn't really allergic anymore and go to town on them. So, I went to Xoco last saturday night and ordered a sandwich slathered with black beans. In my defense I did not know it would come with black bean slather, but confronted with the option, I decided to risk it. I enjoyed half the sandwich immensely, and took off the bean covered bread for the second half. As I left the restaurant, I began to feel itchy. As I waited for the bus, I started to cough. As I rode back to my friend's apartment, my eyes were burning. Two benadryl later, I was done for the night. So... I guess I am still allergic. Thus, I have been practicing how to say "soy allergica al frijoles negros" over and over again in my head. I don't even think that is the right way to say it. But, here I am at a cafe, and I was able to order the Oaxacan specialty sin frijoles negros with ease. So, I am going to be just fine. 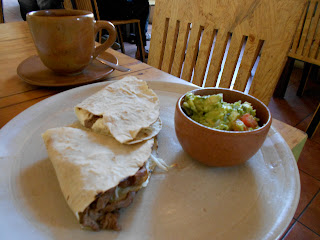 The Spanish one is a bit harder. I have traveled in plenty of places where I don't speak the language, but it has been a while and it is rare that I am mostly alone while doing so. In the last 24 hours I have had to accept the reality that I seem like a total idiot to most people I meet. Today, I purchased a Mexican cell phone and I had about 4 employees trying to explain the phone to me. Luckily, we all laughed at how little I was understanding and made it through. I am researching Spanish schools and plan to start a school on Monday. Also, I am staying with my friend Nikki. She is fluent and fully connected to Oaxaca. So, I am not totally alone. I really could not be happier to be here with all the travelers discomfort in tow. Thankfully, I have two months to explore and digest the food, the language, the culture, and the beauty. 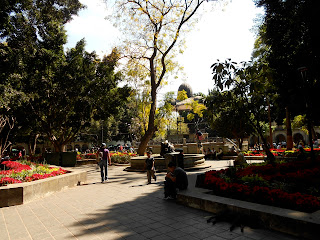 I have completed the first trimester of the YOOT. Here is the recap with a few lessons learned.
I could go on and on with lessons learned, but I think they are still seeping in. And right now I am mostly looking forward. At 1 am on January 26th, I am boarding a flight to Oaxaca City and I will not be back until the end of March. I have loose plans including some meditation and yoga time, some Spanish studying, some exploration of the organizations and issues, and some travel, but nothing is in stone. I do have an amazing friend with an apartment for me to stay in and the willingness to answer lots of my questions.

I have been YOOTing for over four months now, but a lot of that time has been full of logistics and deadlines and dependency. It has been great, but also really hard. There have been lots of questioning moments about whether I did the right thing. I left a city I love, a job I love, and so many people I love to follow some vague plan and transition into some vague place. Am I crazy?

2012 has brought a welcoming shift. Going to Mexico will bring a nice change of scenery. The world I am opting out of does not seem to be going anywhere for quite some time, so I might as well get away when I can.