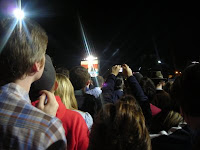 Refusing to let that night die. 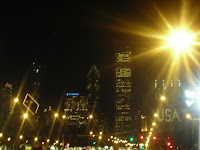 I have clearly taken a hiatus from the blog world. If in that time you have felt compelled to stop reading, I get it. There is a lot of media out there, a lot of interesting intrigues to choose from. “Interesting intrigues” is probably redundant, but I like it. That is maybe why I did not do so well on my GRE I took last weekend. I like redundancies. But, I am not going to use my blog to vent about that experience. I’ve got back up plans; all will be well.
What I really want to write about is Tuesday, November 4th. It’s crazy to think that day was only two weeks ago, yet so quickly we have resumed our regular lives. I admit that it feels a bit forced to be writing about that night now, it is old news, right? But I am sticking to my commitment to myself to write of that night for the very fact that it shouldn’t be old news yet. We need to be rejoicing in the spirit of November 4th for more than a few hours or days, it is on us to keep it alive.
I was lucky enough to be one of the million who gathered in Grant Park to see Obama accept his victory. That night epitomized why I love partying with liberals. Prior to attending the festivities there were several murmurs of fear. What if Obama loses? There will be massive rioting no matter what! That many people downtown will just be chaos…
But I assure you; it was the calmest crowd of a million to ever gather. We stood for hours in a huge park with limited visibility and watched the news on a big screen. Never once did I hear people grumble as their toes were stepped on and shoulders rubbed by complete strangers. When one person cheered, everyone cheered. It didn’t even matter what we were cheering for specifically, there was simply a wave of positivity that we were all riding. One stranger gave me a piece of pizza he couldn’t finish. Another offered me his extra water bottle when he overheard me discussing my thirst. And then there was the moment. The moment that Obama was declared our president-elect. I remember bending over in a loud relief filled yelp, grabbing for whoever was close and holding on tight. That moment will forever be locked in my mind, body, and soul with no words to ever do it justice. So he won, and still we were capable of continuing to stand peacefully together watching the news. We listened to a terrible rendition of the Star Spangled Banner without a single boo. We danced and sang along to classic oldies songs. And we sporadically broke out into gasps, shrieks, yelps, and yippees. 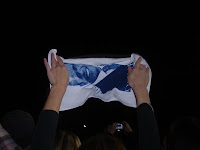 When Barack Obama took the stage a stillness overcame the crowd. There was only a handful that could actual see his face, but his presence permeated throughout the crowd. My friend’s boyfriend lifted me so I could see his figure on the stage. But I think what is remarkable about Obama, is that he is so much bigger than his body. He brought together 1 million people in a public space to be there with him in that moment. He gets it. We got it. It was beautiful. 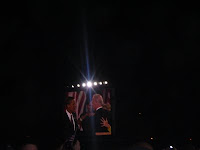 After his eloquent speech, and lots of waving, people slowly ambled out of the park. There was no stampede. Simply a leisurely walk out onto Michigan Avenue. The street was closed, and the happy crowd filled it in celebration. Cops were everywhere, but their presence was not oppressive. People were taking pictures with them and petting their horses. My friend’s and I walked up Michigan Ave., breathing it in as deeply as possible. A short eccentric man walked up to me and hugged me, saying. “Hugs for Obama.” No other time would it be ok for a stranger to walk up to another stranger in downtown Chicago and hug her.
So, as times get rough. As the economy looks bleaker and bleaker. As George Bush does his final damage. We must remember to keep the night of November 4th alive. Prior to that night we were chanting, “Yes we can.” On that night we chanted “Yes we did.” We did get him elected, but our work is not done. 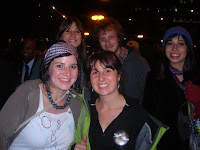